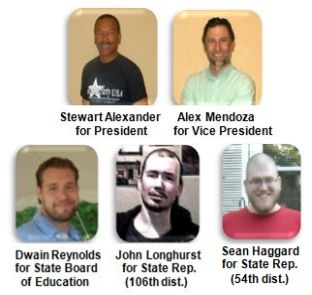 * In accordance with the ticket’s certified write-in status in Michigan’s 2012 General Election, all presidential write-in votes cast for “Stewart Alexander” will be officially counted as votes for the Alexander/Mendoza ticket. Therefore it is only necessary to write-in Stewart Alexander’s name on the Michigan ballot in order to cast a vote for the ticket and its certified slate of Michigan presidential electors.

** Due to the Michigan Secretary of State’s refusal to recognize the ballot status applicability of the Socialist Party of Michigan’s nomination certificates, the candidacies of Dwain Reynolds and John Longhurst will be listed on the Michigan ballot under the partisan label of the Green Party of Michigan whose dual party nomination they each additionally received.

● Repeal the “Emergency Manager” Dictatorship Law: Vote NO on Proposal One (12-1) (SPMI Statement).