The state-orchestrated poisoning of Flint’s water supply represents the latest local crisis to emerge from the ruling class’ increasing turn to colonial rule over the urban communities worst devastated by its own industrial capital migration and desertion. Concurrently with awarding over $2 billion in tax subsidies to the automaker that chopped 72,000 jobs from Fli 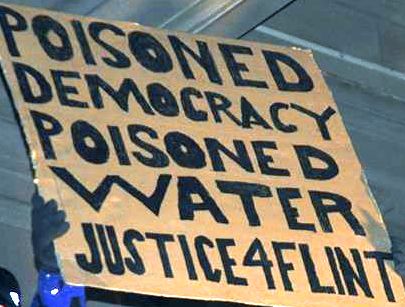 nt’s economy, Michigan’s corporate politicians vulturistically seized upon the battered city’s revenue-stream challenges to replace the very structure of self-governance with a state-run corporate austerity regime holding total contempt for the health and well-being of the city’s disenfranchised populace.

Equally as false as the water safety assurances of Snyder administration officials throughout the year and a half following the water source switch to the Flint River is any notion that Snyder and  other high level officials were not long before informed of the lead contamination resulting from the expense-based decision to omit federally mandated corrosion control measures. Indeed, even more damning than either the preceding year’s span of water-safety related emails to Snyder’s top aides – or even the state’s deliberate procedure of running the tap for several minutes before collecting water samples – is the fact that, in the fall of 2014, Snyder’s Flint-installed emergency manager arranged for General Motors to obtain a special reconnection back to the Detroit water system’s Lake Huron-source on account of the Flint River water’s untenable corrosion of engine parts assembled at its Flint Engine Operations Plant.

Similarly, as of January 7, 2015, the state government office building in Flint began providing coolers of purified water adjacent to each drinking fountain for state employees. In conjunction, the state’s Department of Technology, Management and Budget (DTMB) concurrently issued a notice announcing that “[t]he coolers will arrive today and will be provided as long as the public water does not meet treatment requirements.” Both the January DTMB notice and decision to rely on such a substitute commercial water source came at the very same time that state officials were insisting to Flint residents that the local tap water was safe to drink.

What Snyder and company actually mean by their claimed lack of earlier knowledge about the problems with Flint’s water is that they did not know the contamination would evoke wide enough attention or concern to be the subject of a national scandal. After all, while not attributable to the water supply, children in many of Detroit’s zip codes have long tested positive for lead poisoning at far higher rates than those of Flint—with relatively little wider public outcry.

In Flint, Snyder simply relied on the same assumption under which his administration has systematically opted to subject black-majority cities to emergency manager control, despite withholding the same approach to majority-white cities facing greater financial challenges. The crux of that assumption is the premise that as long as such predation and injustice is sharply racially and spatially tailored, neither the lives nor political rights of poor urban blacks matter enough for such actions to elicit large scale political consequences.

Although both leading candidates for the Democratic presidential nomination have attempted to cast the Flint scandal as a solely Republican affair, the U.S. Environmental Protection Agency, led under the Obama White House, was equally complicit in its knowledge and concealment of the water contamination from very early on. Indeed, the EPA even took explicit measures to suppress the internal memo produced and internally submitted by Chicago-based EPA agent and lead-expert Miguel Del Toral, who, upon having discovered the apparent lead level spike in February, 2015, further personally verified the cause and scope of the contamination in April.

In response to the internal memo, Del Toral’s boss, then EPA Region 5 Head Susan Hedman, both removed and silenced Del Toral from any further work on the matter and contacted Michigan state officials to assure them that Del Toral had been “handled” and wouldn’t be heard from again. As later observed by Marc Edwards, the Virginia Tech professor who performed the first independent lead testing of Flint’s water to refute the state’s sham test results, “It was very clear that an agreement had been reached of some sort between the EPA and MDEQ that would let MDEQ have their way with Flint’s children.”

Nor was Democratic complicity limited to the federal level. As revealed by the Snyder administration emails released after the story broke, “the ultimate decision” to approve the switch to the Flint River was made by then State Treasurer Andy Dillon, who, directly prior to joining the Snyder Administration as a cross-party appointee, served as the Michigan Democrats’ chosen State House Speaker. Also backing and celebrating the move was Flint’s Democratic then-Mayor, Dayne Walling, who subsequently kept his mayoral title while concurrently assuming the status of a direct full time employee of Flint’s emergency manager.

Among the most astonishing revelations to surface since the news of the water crisis broke is that the change of Flint’s water source to the Flint River was not, by any stretch, a cost saving measure as Snyder and his associates had all along claimed. In fact, while the switch from the Detroit water system to the Flint River was intended to be a temporary two-year measure, pending a subsequent switch to the new Karegnondi Water Authority (KWA) pipeline upon its construction, the Detroit Water and Sewerage Department (DWSD) had offered Flint a 50% reduction on its then-existing rates, resulting in savings of $800 million over 30 years and 20% lower costs than the KWA connection. Yet, upon categorically rejecting six different DWSD proposals, Flint’s emergency manager, under control of the Governor’s office, not only switched the city water source to the Flint River, but then immediately sold a 9-mile stretch of its former DWSD pipeline to Genesee County so as to hinder any possibility of reconnection.

Consequently, in light of such falsity to the entire cost-saving pretext for the decision to replace the DWSD source with the Flint River, the only probable explanation behind it is that it was intended to provoke a sudden revenue crisis for the DWSD system’s operations which would influence the then-pending approval and launch of the Great Lakes Water Authority’s corporate-modeled takeover of the DWSD infrastructure as the key step toward the Detroit water system’s  privatization. Accordingly, it thus appears that cutting Flint’s municipal costs was never even a genuine factor in the equation. Rather, the real purpose of the change was to use Flint as a pawn to help instigate the release of public assets to private business interests elsewhere in the state.

The Socialist Party of Michigan calls for the recall and criminal prosecution of Michigan Governor Rick Snyder and prosecution of all other state and federal officials who knowingly attempted to maintain or conceal the poisoning of Flint’s tap water, as well as the payment of state reparations for the tragic and irreversible harm inflicted.

Additionally, we call for a massive increase in federal funding for lead removal and exposure reduction, the restoration and expansion of state municipal revenue sharing, and large scale public projects and measures to rebuild Michigan’s crumbling industrial cities —including the reopening of closed factories under social ownership and workers’ control and the enactment of a 100% capital flight tax. Most importantly, we strive to usher a new social and economic order in which human needs and democratic rights are never made subordinate to private investor and business interests.